Francesco has a substantial international experience from across four continents, from Europe to St. Barth, from Sydney to San Paolo, from London to Dubai, ending with Canada, working alongside chefs such Helena Poulakka, the former right hand of Pierre Kofman, 3 Michelin Star, at La Tante Claire in London. He also worked with Andrea Provenzani at the restaurant Il Liberty in Milan and then moved to Sydney, at the restaurant owned by Giovanni Pilu, in Dubai working with Marco Pierre White before becoming the Executive Chef at Roberto Cavalli restaurant at the Fairmont Hotel. After leaving Dubai he moved to London to work at Roka, a robatayaki japanese restaurant, to then become the Head Chef at Salut restaurant. Francesco never forgot his roots and following the philosophy of Fradis Minoris, with the supervision of chef Claudio Melis, 1 Michelin Star in Bolzano inviaggioristorante, he will create extraordinary dishes with the local authentic ingredients, exclusively seafood, such as mullet, skipjack, barracuda, and local aromatic herbs, such as samphire, sea fennel, sea rocket and wild asparagus. To create a cuisine that reflects the environment, promotes the marine biodiversity and the herbs of the lagoon. Overlooking the crystal clear waters of Sardinia 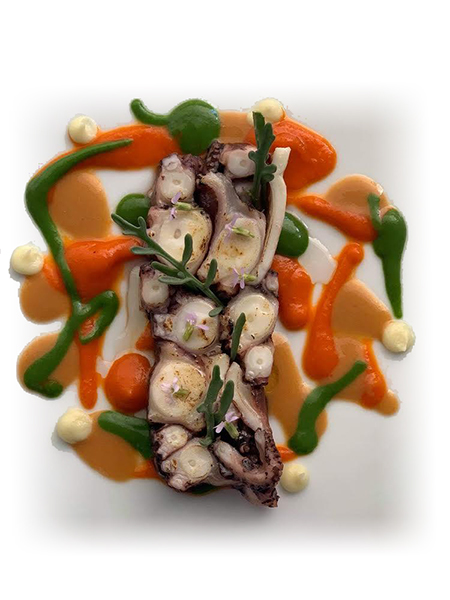